The Falklands War lasted 74 days between Argentina and the United Kingdom in 1982. Argentina had long claimed sovereignty over the islands situated 300 miles south of their mainland in the South Atlantic ocean.

The ruling military junta did not believe that Britain would attempt to regain the islands by force, so in March 1982, Argentine salvage workers occupied South Georgia Island, and a full-scale invasion of the Falklands began on April 2nd, codename Operation Roasrio.

Argentine amphibious forces rapidly overcame the small garrison of British Royal Marines based at the Moody Brook barracks near the town of Port Stanley on East Falkland and the next day seized the dependent territories of South Georgia and the South Sandwich group.

Under orders from their commanders, the Argentine troops inflicted no British casualties, despite suffering losses to their own units.

On 4th April 1982, the British government under the leadership of the Prime Minister Margaret THATCHER dispatched the British Naval Task Force to sail to the Falkland Islands, this consisted of 127 ships, including 2 Royal Navy Aircraft carriers, with a total of 42 Military Aircraft, 43 Navy Vessels, 22 Auxiliary ships, and 62 Merchant ships for logistical support. They had to sale the 8068.56 miles to reach the small Island chain.

The task force reached the Falklands in early May. On 2nd May, the Royal Navy submarine HMS Conqueror sank the Argentinian cruiser General Belgrano, this was very controversial and cost the lives of 323 of her crew. After this incident, Argentinian ships remained in port.

The Royal Navy lost several warships to attacks from Argentinian aircraft, which were armed with Exocet missiles one of which sunk HMS Sheffield  2 days after the the sinking of the Belgrano. HMS Ardent, HMS Antelope and HMS Coventry.

[Image courtesy of the Sheffield Telegraph]

Its Fleet Auxiliary ships were attacked at Fitzroy and the supply ship Atlantic Conveyor was also sunk and carried valuable helicopters. which was a heavy blow for the British troops. 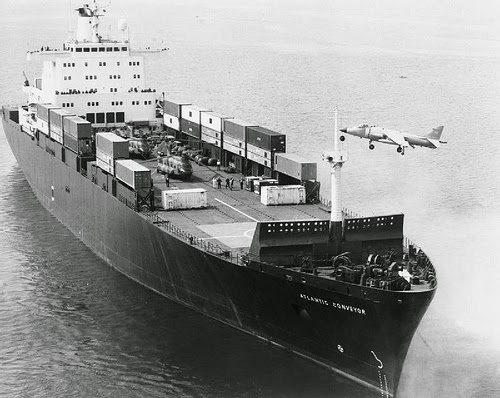 British forces landed on the islands town of San Carlos and Port Carlos on 21nd May. This included 2 and 3  Para and 40, 45 Commando Royal Marines,

After a series of engagements against a well dug-in but ill-trained conscripted Argentinian Army,  2 Para's fought at Goose Green and defeated the enemy after a long battle, and captured 961 prisoners of war.

Due to the loss of the helicopters British forces faced a long arduous march towards Port Stanley, and engaged in fierce battles on Two sisters Ridge, Mount Harriet, Mount Longdon, and Mount Tumbledown which was taken by the Scots Guards,  this opened up a route to Port Stanley and a soon to be victory.

On 11th June the battle for Stanley began. Britain lost five ships and 255 lives in the fight to regain the Falklands, and Argentina lost its only cruiser and 649 lives. Humiliated in the Falklands War, the Argentine military was swept from power in 1983, and civilian rule was restored. In Britain, Margaret Thatcher’s popularity soared after the conflict, and her Conservative Party won a landslide victory in 1983 parliamentary elections.

Become a Member and Collect Rewards

With more ways to unlock exciting perks, this is your all access pass to exclusive rewards.